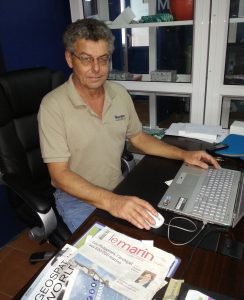 Born in Brittany, a French region traditionally known for its strong fishing communities and its highly skilled seafarers, Claude Roullot naturally started his career in the fishing sector, following several of his family members’ and ancestors’ footsteps. He served on ships in Brittany and in the West Indies, quickly became a captain and sailed the African seas.

Afterwards, he remained involved in the fishing industry and worked on numerous projects related to the sector’s working conditions and to the optimization of the seafood industry.

Claude Roullot’s expertise as well as his excellent knowledge of Madagascar where he grew up as a child attracted attention from the Food and Agriculture Organisation of the United Nations (FAO). After a first field mission in Madagascar, he was called in different African countries for several international organization. During his appointments, Claude Roullot discovered the potential of satellite technologies and realized these could improve many workers’ lives, safety and efficiency.

He then decided to operate a career move. After a few years working for the private sector and satellite business, he started his own company, Agence Via Space, based in France.

Claude Roullot never forgot his childhood in Madagascar and kept strong links with the country. He therefore decided to go back to the Indian Ocean region to open a sub-branch and quickly identified Mauritius as a perfect gateway to his regional activities. In 2000, Satellite Air Time was created in Mahébourg before being transferred to Port-Louis and in 2006, Via Space Madagascar joined the group.