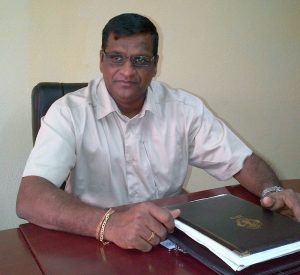 A Mauritian citizen, Koobher Mohesh joined Satellite Air Time as Director of Operations in 2013 after 26 years of service in the Mauritian Police Force and National Coast Guard.

In 1986, Koobher Mohesh was enlisted in the the Mauritian Police Force and was quickly identified as a promising element. When the Mauritian government decided to create the first National Coast Guard of the country, he was selected as one of the 25 top officers to form part of the commissioning team of this new branch of the Mauritius Police Force . Having started as a seaman on board the Coast Guard ship, he followed several high-level trainings in various naval military specialties around the world, notably in India where he lived more than a year but also in Europe, China, Singapore,Djibouti and Chile. He evolved in his career to become Navigator and Bridge Watch Officer on board all the Coast Guard ships where he managed important teams of mariners.

In 2007, he was asked to manage piracy and other maritime surveillance issues, being appointed Staff Officer Operation and Officer in Charge of the Maritime Rescue Coordination Center of Mauritius managing Search and Rescue operations, illegal fishing, drug smuggling and piracy incidents. During this time, he actively contributed in the publication of the Mauritian Piracy Contingency Plan.

His service was recognized with several awards including the Merit Award for Professional Competence and Dedication and the Long Service and Good Conduct Award by the President of Mauritius in 2004 and 2012.

Koobher Mohesh met the Satellite Air Time team during his time serving as a Coast Guard officer and collaborated with them on several occasions. Impressed with their efficiency, responsiveness,professionalism and availability, he was happy to accept the newly opened position of Director of Operations after his retirement from the public service. His experience in the maritime sector, his knowledge of the Indian Ocean waters, his previous position of end-user of Satellite Air Time and Sixth Ocean products as well as his strong ability as a team administrator appeared as invaluable assets for the company.