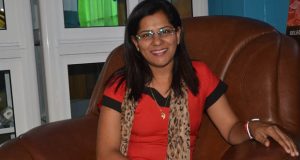 When the Via Space group established in Mauritius in 2000 under the name of Satellite Air Time, Minoo T. Ramsarran was the first team member to join the company. A Mauritian citizen, she began as an assistant but quickly gained more responsibilities and reached management level in the space of a few years.

A hard worker, she learned every aspect of the satellite industry and succeeded in knowing the Indian Ocean market better than anyone else in the region. She completed her internal training by getting a degree in business management.

When the French director of the Mauritian branch went back to her home country in 2010, Minoo Ramsarran, who was then Administrative Manager, was naturally appointed as her replacement. It proved to be a successful move: in three years, she made the benefits grow and expanded the activities of the company.